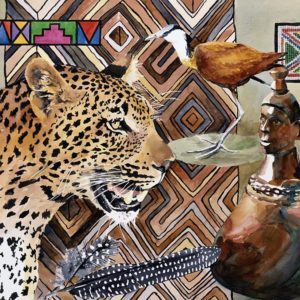 Leopards are the least social – and perhaps the most beautiful – of the African big cats. They usually keep to themselves, lurking in dense riverine bush or around rocky koppies, emerging to hunt late in the afternoon or at night.

The leopard is a graceful animal with an elongated body, relatively short legs and a long tail. After the lion, it is the next-biggest African cat with an average body mass of between 60kg and 70kg, standing about two-thirds of a metre tall at the shoulder. Leopards in the wild may live up to 15 years. Unlike the lion, the leopard is a silent creature, only occasionally emitting a cough-like call.

The leopard’s hunting technique is to either ambush its prey or to stalk it. In either instance, it tries to get as close as possible to its target. It then makes a brief and explosive charge (up to 60km/h), pouncing on its prey and dispatching it with a bite to the neck. Because leopards do not have the aptitude to chase their quarry over any kind of distance, they will give up if the initial element of surprise is lost and the intended victim gets away. Wildlife paintings of leopards

Leopards are capable of carrying animals heavier than themselves and will often drag their prey into the fork of a tree several metres off the ground. This tree “lardering” protects the carcass against scavengers and allows a few days of undisturbed feeding. Painting of leopard.

These big cats eat a variety of food, from wildebeest to fish, but most of their diet comes in the form of antelope. Baboons and leopards appear to be ancient enemies. Leopards will often stalk baboons sleeping in the trees at night, and try to carry off one of the troop.

There has been a case recorded in which a leopard that tried to attack a baboon in broad daylight was torn to pieces by the rest of the troop, which quickly came to the shrieking primate’s defence.

Researchers believe that each individual leopard accounts for approximately 20 kills a year. Painting of leopard. Leopards eat on average about a third of the carcass of the animal they kill and this works out at roughly 400kg of meat per leopard each year. This means that leopards probably need just over a kilogram of meat a day.

A leopard will often lick the fur off the carcass of its prey before it feeds, starting with the thighs or the chest. Leopards are highly adaptable creatures, capable of living in semi-desert conditions as well as dense subtropical bush.

Their territories can also vary in size from 10 square kilometres, to several hundred square kilometres. The animals scratch trees and use urine to mark their turf. A male will defend his territory against other males, but will share territory with females. Painting of leopard.

Male and female leopards spend only a brief time together while they are mating and then go their separate ways. The female will then raise the cubs on her own. Leopards can survive for long periods without drinking, satisfying all their moisture needs from their prey.

How leopards differ from cheetahs

Both of these big cats are spotted, so they can be confused.

Cheetahs have a slender build with small head and an elongated body; slightly dog-like appearance

Markings – Leopards have bigger rosettes rather than spots. They have no “tear mark” stripes down the face

Cheetahs stalk prey and then make a 60m to 100m charge, knocking the fleeing animal off balance

Leopards are probably one of the most secretive and elusive animals in the animal kingdom, high adaptability their master ability for stealth makes these animal a definite see!!

Leopards can leap up to 6 meters into the air

Leopard spots can change over time

They incredibly strong and may carry their prey into trees avoiding scavengers from stealing their food.

Females will only allow males close to them during mating season, Leopards mate every 15 to 20 minutes over a period of 3 days.

The Leopards vision at night is 7 times that of a human and hearing is 5 times better than that of a human. At birth the cubs eyes are shut and remain so for up to 2 weeks.

Both Leopards and Lions roar. Leopards like to swim while Lions do not. Leopards forelimbs are stronger than that of a Lion.

How to tell Leopards Apart Painting of leopard

Each individual Leopard has spots on its face and the spots and its relative position are unique. They are also different on each side. The spots are identifiable by the patterns. The spots on either side of the nose and muzzle serve as a very reliable way in which to identify individuals. Painting of leopard.

Leopards do not hunt each day, large prey caught may be fed on for upto 4 days. Females with cubs usually hunt double the amount of time. The Leopard is considered to kill more predators than any other carnivore.

Leopards can survive without water for long periods. In the Kalahari for instance Leopards will eat succulent fruit like tsamas to increase their moisture content.

The most extraordinary prey caught on camera by a Leopard was a Crocodile in the Kruger National Park. The crocodile was suffocated and then dragged off.

The average consumption per male is 3 kg and females is 2 to 3 kg. It is estimated that as much as 12 kg may be consumed at one go. In weight therefore adult Leopards consume approximately 20 to 30 Impalas per year. Painting of leopard.

Long whiskers serve as sensory nerves which are incredible sensitive to movement. The whiskers give a clear indication of the width of a opening thus avoiding getting stuck at night.

The most extraordinary prey caught on camera by a Leopard was a Crocodile in the Kruger National Park. The crocodile was suffocated and then dragged off.

The average consumption per male is 3 kg and females is 2 to 3 kg. It is estimated that as much as 12 kg may be consumed at one go. In weight therefore adult Leopards consume approximately 20 to 30 Impalas per year.

Long whiskers serve as sensory nerves which are incredible sensitive to movement. The whiskers give a clear indication of the width of a opening thus avoiding getting stuck at night.

Leopards are probably one of the most secretive and elusive animals in the animal kingdom, high adaptability their master ability for stealth makes these animal a definite see!!

These unbelievable animals are relatively easily recognizable, if you can spot one first of course! They are a large cat with numerous black and brown rosettes on the back and on the underside and limbs.

The pattern on each animal is much like a fingerprint on a human; every leopard has their own distinct set of markings. These markings make for very effective camouflage and also why these animals are so hard to spot.

The tail of a leopards is also a good “mood ring” as it indicates the mood of the leopard and is also used a means of non- verbal communication.

Leopard have excellent senses, they have long whiskers called vibrissae that acts as sensory organs that can let a leopards know whether or not they can fit through a particular space, this is essential for moving about in the dark.

Often the most common indications of leopard are their tracks that are left behind, clawed scrape mark on trees, feces and rasping noises around dusk and dawn. Leopard of both sexes will communicate within their territories through an exchange of information. Painting of leopard.

How they do this

This is achieved by demarcating their territory boundaries with very strong smelling urine, although only the male is known to spray territories.

The urine carries many messages such as who has what boundary, the hormonal level in females and approximately when last the individual that left the marking was in the area.

Leopard will also rub their faces on low hanging branches and along roads or pathways. Leopards have scent glands on their cheeks which leave behind olfactory messages.

Leopards are found throughout Africa but have been exterminated in the North of Africa and in the greater part of South Africa.

Leopards enjoy think vegetation and use this as a means of hunting and hiding. Leopard’s natural predators include humans, lions and hyena.

Leopards are built for strength and whilst they are extremely powerful the male weighs in around 60-90 kg and the female between 30-60 kg. Despite their size leopard can hoist almost their own body weight prey into trees where they seek refuge from lion and hyena.

Leopard feed on mainly small to medium mammals between 8-17 kg in weight. Although leopard have been known to be very picky eaters, plucking feathers and plumage from birds before they eat them, leopard will consume any foods available to them in the area.

Leopards are also mainly nocturnal hunters but are extremely opportunistic and will not pass up a hunting opportunity even during the day. They hunt by stalking because they rely heavily on their ability to stay hidden for as long as possible to successfully hunt.

Leopards are solitary animals, the males often referred to as “tom” cats. Both male and female leopard will defend their territory. Females tend to base territories on which food types are available, but males more on the availability of females around.

Don’t be fooled though – female leopard are extraordinarily good at flirting once they get together with males to mate. The sizzling affair will last between 2-5 days with copulation occurring every 5-10 minutes.

The female’s gestation period is around 90-112 days and they usually delivery 2-6 cubs. Cubs are usually born in dens, often in dense thickets, caves or burrows.

Cubs will be hidden for at least 6 weeks, their eyes opening at 1 week of age. Cubs will suckle on their mothers for 3 months and will reach maturity at two years of age.

Leopards experience a high cub mortality rate and will lose 50% or more off their offspring. Despite female leopards hiding cubs away they are often found by carnivores and killed. Almost all mammal predators will kill each other cubs off instinctively as a way to reduce competition.

Playing is an integral part of cubs “training”; through play they learn survival skills such as hunting and stalking.

Leopards have disappeared from many regions and as a result many projects are underway to monitor these incredibly beautiful animals.

Surveying is done through remote camera traps and one of the largest Leopard populations survey, takes place on the Eastern shores of the wetlands park.

This comes to no surprise as leopard is commonly seen in this coastal park on self and guided game drives.  These elusive animals are even seen in the town of St Lucia South Africa.

Leopard are amongst my top animals to see in the wild and I can only hope that anyone that visits this beautiful little town can experience the thrill and sheer beauty of these elusive animals.